Peanut is a college student from the Phone Update. She is unlocked as a Phone Fling with Elle at Frenemy level.

After texting the wrong number and asking about notes from her PHYS 402 class, which you don't have, you ask her for a "saucy" picture which she sends you from the study hall she's studying in.

From her texts she seems to be a very shy person that's eager to get some 'action'. Later on, she accidentally gave your phone number to Miss Desirée when she's daydreaming about you.

Peanut was chosen as the winner of Vote-a-Fling Season 1 and is the first Phone Fling girl to be turned into a fully Date-able girl. To unlock her as a full girl, you have to complete all 3 of her conversations with you. She is the thirty-first girl in the game's main tab, but she is not part of the main story and you do not need to unlock any other girls to obtain her.

You first meet Peanut in person at a cafe and end up destroying her self-confidence after stopping a criminal from robbing people.

Being a college student, Peanut cares about her classes, specifically Physics. She is an introverted and shy person, but after texting you, she begins to open up. She reveals that you're the first person she's been out on a date with, and falls in love with you soon after.

Note that pauses under 30 minutes long are not indicated. Where the progress column says (A) or (B), these are your left and right options for how to respond.

A wrong number text. But with you being You, it quickly becomes rather flirtatious. Peanut's responses in this conversation do not depend on what you say, only on whether you are playing SFW mode or NSFW mode.

When you complete the first conversation with Peanut, Miss Desirée is unlocked. After you start texting with Miss Desirée, Peanut contacts you again. This conversation further develops Peanut's character, but does not contain any new pictures. Peanut's replies now depend both on which choice you make and whether you are playing SFW mode or NSFW mode.

Peanut panics. You comfort her.

After the second conversation with Peanut complete, a 4 day, 4 hour timer starts for Peanut's third conversation. This conversation sets up your meeting Peanut in person.

Peanut drunk-texts you at the end of the semester. She's been thinking about you a lot. Will she summon the courage to ask you out?

Peanut drunk-texts you at the end of the semester. She's thirsty for you. Will she summon the courage to ask you out?

After the last 4 day pause, Peanut lets you know she's available as the 31st girl on the Girls tab.

"Hardy har. Is this the part where you pretend you don't recognize me so I start panicking? Here one sec. A picture should jog your memory."

"Here's a little something for your 'imagination'. Since it seems a little thirsty. Hahaha!" 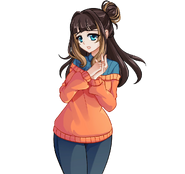 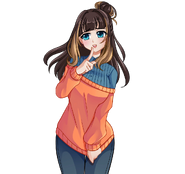 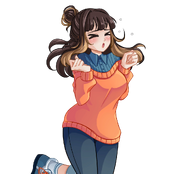 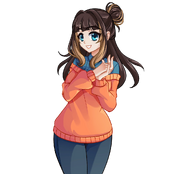 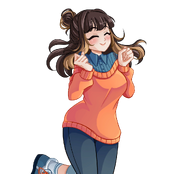 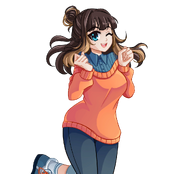 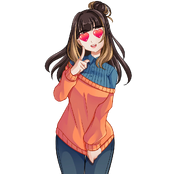 Likes You a Lot Sprite
Add a photo to this gallery 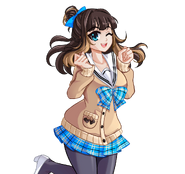 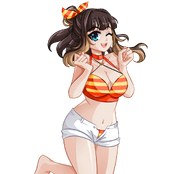 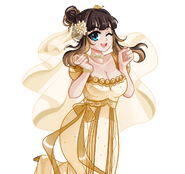 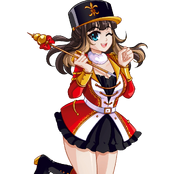 The original glitch that had Peanut as a placeholder asset.